Conjure Doctor Profile
Patsy Moses, In her own words... 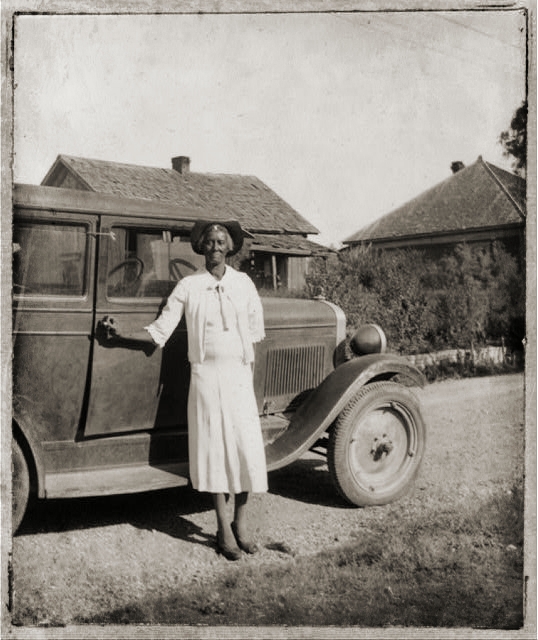 Patsy Moses, 74, was born in Fort Bend Co., Texas, a slave of the Armstrong family. She tells of charms and  "conjure," many learned from ex-slaves. Patsy lived at Mart, Texas at the time of this interview in the 1930s. This is her story.

I was born in Fort Bend County, about de year 1863. My daddy's old master by name of Armstrong brung my folks from Tennessee. My own daddy and mammy was named Preston and Lucy Armstrong . Mammy's granddad was Uncle Ned Butler , and he 'longed to Col. Butler , in Knoxville, in Tennessee. Old master sold he plantation and come to Texas jos' befo' freedom, 'cause nobody think day'd have to free de slaves in Texas. My great grand-dad fit in de Rev'lutionary War and my own daddy fit in de war for freedom, with he master, for bodyguard. He had some fingers shot off in de battle and was tooken pris'ner by dem Yankees, but he run 'way and come back to he master and he master was wounded and come home. Den he moved to Texas befo' I's born. My old grand-dad done told me all 'bout conjure and voodoo and luck charms and signs. To dream of clear water lets you know you is on de right side of Gawd. De old voodoo doctors was dem what had de most power, it seem, over de nigger befo' and after de war. Dey has meetin' places in secret and a voodoo kettle and nobody know what am put in it. maybe snakes and spiders and human blood, no tollin' what. Folks all come in do dark of de moon, old doctor wave he arms and de folks crowd up close. Dem what in do voodoo strips to de waist and commence to dance while de drums boats. Day dances faster and faster and chant and pray till day falls down in a heap. De armour bearers hold de candles high and when day aways and chants day seize with power what sends dem leapin' and whirlin'. Den do time dat old doctor work he spell on dem he wants to conjure. Many am do spell he casts dem days. Iffen he couldn't work it one way, he work it 'nother, and when he die, do he stay buried? No, sir! He walks de street and many seed he ghost wavin' he arms. De conjure doctor, old Dr. Jones, walk 'bout in de black coat like a preacher, and wear sideburns and uses roots and sich for he medicine. He larnt 'bout dem in de piney woods from he old granny. He didn't cast spells like do voodoo doctor, but uses roots for smallpox. and rind of bacon for mumps and sheep-wool tea for whoopin' cough and for snake bite he used alum and saltpeter and bluestone mix with brandy or whiskey He could break conjure spells with broth. He take he kettle and put in splinters of pine or hickory, jes' so day has bark on dem, covers dem with water and puts in de conjure salt. A good charm bag am make of red flannel with frog bones and a piece of snakeskin and some horse hairs and a spoonful of ashes. Dat bag pertect you from you enemy. Iffen dat bag left by de doorstep it make all kind misfortune and sicknesses and blindness and fits. De big, black nigger in de corn field mos' allus had three charms round he neck, to make him fort'nate in love, and to keep him well and one for Lady Luck at dice to be with him. Den if you has indigestion, wear a penny round de neck. De power of de rabbit foot am great. One nigger used it to run away with. His old granny done told him to try it and he did. He conjures hisself by takin' a good, soapy bath so de dogs can't smell him and den say a voodoo over he rabbit foot, and go to de creek and git a start by wadin'. Dey didn't miss him till he clear gone and dat show what de rabbit foot done for him. O, Molly Cottontail. Be sho' not to fail, Give me you right hind foot, My luck won't be for sale.' De graveyard rabbit am de best, kilt by a cross-eyed pusson, De niggers all 'lieved Gen. Lee carried a rabbit foot with him. To keep de rabbit foot's luck workin', it good to pour some whiskey on it once in a while. If you has a horseshoe over you door, be sho' it from de left, hind foot of a white hoss, but a gray hoss an better'n none. Conjures am sot with de dark or light of de moon, to make things waste or grow. Iffen a hen crow, it best to wring her neck and bake her with cranberry sauce and gravy and forgit 'bout her growin'. Everybody know dat.

I larnt all dem spells from my daddy and mammy and de old folks, and most of dem things works iffen you tries dem.

Den dar is de New Year luck signs. Hit is lucky ter eat black-eyed peas an' hog head on New Years day. Yer is suppose ter have plenty ter eat all de year, an' dat yer will have as many dollars as peas ter eat. "Dose black-eyed peas is lucky, W'en 'et on New Years day, Yer allus has sweet taters, an possum cums yer way. So what yer do on New Years day means what yer do all de year, an' so everybody tries ter do de right things dat he wants ter do all de year. De first twelve days ob January is what yer will be doin' all de year. Dey is all kinds ob signs like de horse shoe signs ob good luck an' keepin' de evil speerits away; signs about horses, dogs, an' birds, an' de rooster crowin'. I mus' tell yer 'bout de rooster, effn he crows after sundown yer will hab trouble, an' effn he crows at dinner time yer will have news; den, effn he crows befo' midnight hit means sudden death; effn he crows twice, a death will cum in two days; effn he crows on de fence hit is a sign ob a quarrel wid yer neighbor; effn he crow 'bout 'leven o'clock, hit is a sign de debbil is a laffin', effn on Sunday, yer will kill him on Monday. Den I mus' tell yer 'bout de hen. Effn she crow anytime hit a sign ob bad luck or death; 'specially effn she crow. Any time hit be a black hen, de bes' thing ter do den is ter wring her neck an' bake her wid cranberry sauce, an' gravy an fergit 'bout her crowin', fer she done gone whar she can't crow any more. Everybody knows dat.  A whistlin' woman an' a crowin' hen, Never cum ter any good end. Now I has tole yer all I knows 'bout de Conjur Doctors, de Voodoo de signs fer lady luck, so I will try ter tell yer a little hallowe'en story about three ole witches.

W'en I was a little mite, I uster lissen at night, Kase de ole gray owl, in de sycamore tree, used ter hoot an' hoot an' hoot at me, whoo', whoo', whoo', I trimmel all ober, I surely do, w'en I growed up, I tell yer true, dat same ole owl makes me shiver clean thro' W'en I goes down de road in de dark yer know, Whoo-oo-o, whoo-oo-o ah, who cooks fer you'll? Den we be sittin' roun' de fire a tellin' de ghost stories, an' we hear dis ole gray owl from de chimbley tops dis time, an' he say dis ter us, "Whoo- whoo- is- you? I'se cumin' after you-oo-oo," We say, "Good Lawd hits jes' us, an' we ain't quite ready fer ter go wid you-oo-o. We pore an' sinful as yo' lowed we'd do-oo-o, we'd like ter stay 'til our time is free, oh wait good Lawd 'til tomorrer an' happy we will be." An' de owl say, "to whit, to wee, to whit to wee, wait an' see, wait an' see." So we jes' waits an' we see de Jack-o-Lanterns as dey cum a marchin' in de room ter skeer us, all made wid de hollow pumpkins wid de candles fer de light, an' de white robes er wavin' dey arms, an' de eyes so bright from candlelight, dey dance an' walk 'roun' an' 'roun', den dey gets little slower, until dey stops an' looks at us, den dey giggles an' we say,  Looks like Billy, cum on an' march 'roun' ergin, an' bring yer playmates an' pumpkins too." An' dats de way de hallowe'en ended w'en we had de party long, time ago, 'en I was a little gal, way back yonder in de days jes' after freedom.

Source
Slave Narratives: a Folk History of Slavery in the United States From Interviews with Former Slaves Texas Narratives, Part 1